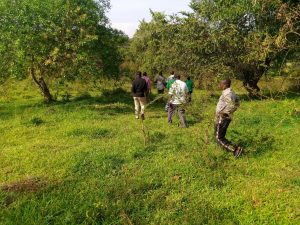 Brief: The FMNR secretariat and members of the steering committee conducted a learning and monitoring visit to some of the farmers practicing FMNR. It is amazing how these early adopters are already benefiting from the practice. A total of six FMNR sites including;

One in Buwanuka village, Kakiri Subcounty which is 2acres being managed by Salongo Musoke Edward and Mr. Frank Sentamu. These were trained by Wakiso District Farmers Association (WADFA). These are currently doin bee keeping in the FMNR site.

Second was in Buwama Town Council having total of 228 acres. This is part of Nawandigi Forest Reserve being restored by Umoja Veterans Sacco. The inspiration came from the regular accusations directed towards soldiers that they destroy forests. Their target is to benefit from the carbon credit. However, they are currently doing bee keeping with 45 hives colonised and harvest 3 times already, three (3) fish ponds. These were supported by Mpigi District Farmers Association (MPIFA)

Third was was the 2.2 hectares in Butambala still part of the Nawandigi Forest Reserve. This is However managed by Captain Nzooli John who practices FMNR-Agroforestry. The trees provide shed to his banana and pineapples. Mr. Nzooli was also trained by MPIFA

Fourth was Kaalo Forest Reserve which is now five years being managed by Kaalo Winners Silk Group in Kyegonza/Gomba. According to Omumbejja Nassolo Josephine, they recieved training from Gomba District Farmers Association (GODFA) and decided to regenerate 40 acres. However, so far on 6.5 acres have been fully restored through FMNR. The members are doing bee keeping within the site, and have restored forest foods like guavas, pineapples and wild passion fruits. They are not cutting even a branch as their mission is purely conservation(restoration of the forest to its initial natural state)

Fifth was in an FMNR-Agroforestry farm land (5acres) of Mr. Luzze Paddy in Kampanga-Nsambwe in Kanoni-Gomba. He is benefiting a lot from the sale of firewood after pruning or harvesting the undesired trees depending on the purpose. Mr. Luzze who is also a member of GODFA grazes animals in part of the farm, and uses the other for crop. The trees are well spaced to allow for other faming activities to take place.

Sixth was a 20 acre farm of Mr. Bamwenda Kennedy in Lwemiyaga-Sembabule. This is a typical cattle corridor but the beauty on the this farm is unbelievable compared to the neighboring farms. Mr. Bamwenda was trained by Sembabule District Farmers Association and has since then inspired other community members to adopt FMNR especially for their area. He was supported by the FMNR network with bee hives which have all been colonized. This motivated him and pledged to buy more 40 hives to add on the ones he has. 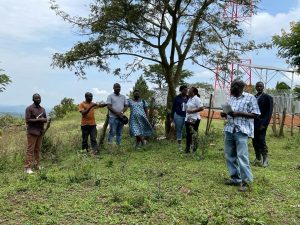