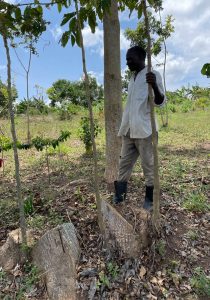 Farmer Managed Natural Regeneration (FMNR) is the systematic regeneration and management of trees and shrubs growing from living tree stumps, roots and seedlings. Where there is bush encroachment, the same principles of selection, thinning and pruning apply.

The practice involves “actively managing and protecting non-planted trees and shrubs with the goal of increasing the value or quantity of woody vegetation on farmland”. In FMNR, farmers select and protect the healthiest, tallest and straightest stems of native trees and shrubs sprouting from stumps or roots on ploughed and grazed land. They remove unwanted stems and side branches to reduce water competition and facilitate the growth of selected stems, which can quickly produce wood fuel and fodder.

FMNR may also involve protecting and managing seedlings growing spontaneously from seedbanks in the soil and contained in livestock manure and bird droppings. The planting of seedlings may be incorporated in FMNR management practices to enrich existing vegetation, especially when coppicing stems are sparse and the soil seedbank is poor.

The main costs associated with FMNR are in the time it takes farmers to protect and prune the regrowth and those associated with promoting and teaching FMNR practices (where this is necessary). FMNR is simple to implement and can be scaled up quickly, provided that latent seeds and living tree stumps and roots are present at the site.

A key lesson gained from diverse experiences in FMNR is that property rights to trees are essential if farmers and communities are to protect them. Equally important is the need to transfer land rights and authority to local communities to enable them to access and use the natural resources they are protecting.

Uganda has continuously lost its forest cover from 24% in 1990 to 9% in 2015 making it one of the countries with the highest deforestation rates globally. With reforestation and afforestation efforts by state and non-state actors, an increase to 12.4% by 2020 was realized. As the country continues the struggle to restore forest cover through a number of commitments and efforts such as, the NDP III which targets to increase the national forest cover to 15% by 2025 including planting 200 Million trees (150,000ha) which translates to 18% forest cover by 2021; the National Vision 2040 which targets to reach 24% by 2040; the Bonn challenge commitment to restore 2.5million hectares of degraded landscapes by 2030; and NDC target of increasing forest cover to 21% by 2030, a number of challenges have been realized.

The challenges to tree growing and realizing the commitments made include limited access to financing, weak governance, and limited extension services; while on-farm challenges relate to termites, climate change-related effects such as drought and floods, fires, lack of seed and seedlings among others. FMNR is a cheap and replicable model, which if implemented well can address most of the on-farm challenges and contribute to increasing forest cover.